Our 2nd Corinthians Bible study guide has 28 free lessons. Each lesson will guide you through one passage at a time in order to discover the meaning and obey the principles within.

On Paul’s second missionary journey, he visited Corinth and established the church there (Acts 18). Corinth was a prosperous trade hub on an isthmus of Greece which connects the Peloponnese peninsula with the mainland. Boats would have had to travel far around the southern tip of Greece so instead many captains opted to haul their boats and cargo across this narrow isthmus and save time on their journey. As a result, Corinth was a trade hub.

It was also a decadent city. Corinth was home to the temple of Aphrodite, a Greek goddess of love. This temple employed over 1000 prostitutes as temple workers. The city was extremely immoral to the point that being called a “Corinthian” took on the meaning of being an immoral person.

Into this corrupt culture, Paul took the gospel. Many believed and a church started. Paul spent 18 months there before leaving. But the church struggled. Immorality and sin crept in. Paul wrote a total of at least four letters to rebuke and encourage this church. We have 1 and 2 Corinthians. In 1st Corinthians, Paul strongly rebukes the church for its lax attitude toward sin. Eventually, after another letter and a face to face meeting, the Corinthian church repented.

Thus, 2 Corinthians is a much friendlier and very personal letter. Paul defends his apostolic credentials and his personal love and care for the Corinthians as he continues to restore his relationship with them. He also details much of the suffering he faced for Christ and for them, motivating them to stand strong. Other important themes include giving, endurance in afflictions, rejecting false apostles, and holiness.

We hope you enjoy studying our chapter by chapter Bible study guide and find it fruitful for your own walk with the Lord.

2 Corinthians E-book: This entire study guide is available to download from our store here.

2 Corinthians Paperback: You can get this study guide as a paperback version from Amazon. 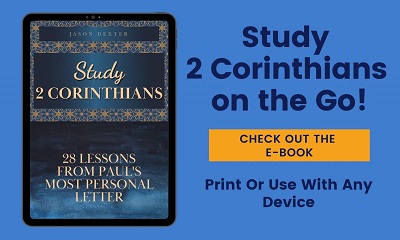 We hope you enjoy studying 2 Corinthians in your own small group.