These small group studies of Colossians contain outlines, cross-references, Bible study discussion questions, and applications.  Visit our library of inductive Bible studies for more in depth inductive studies on this and other books of the Bible you can use in your small group.

The City: The ancient city of Colossae was located in Asia Minor, which is now modern day Turkey. It was built on an important trade route and it was trading that Colossae was known for, especially a rich dark cloth that was made there. Earthquakes hit the city in AD 17 and AD 60, the second one likely a short time before this letter was written. These disasters, in addition to business competition, brought about a gradual fade into obscurity and the city no longer existed in 400 AD. Even during the time of Paul this city was smaller than its nearby neighbors in the Lycus valley, Laodicea and Hierapolis.

The Author: This letter was written by the apostle Paul as is attested in verse 1. In addition to the evidence within the text, external evidence and early church tradition also points to Paul as the author. This is one of four “prison epistles” along with Philemon, Ephesians, and Philippians. Paul wrote these letters while imprisoned in Rome awaiting his appearance before the insane Nero. It was probably around AD 61-62 when Colossians was written.

The Theme: The church of Colossians may have been the smallest numbers-wise of any other recipient of Paul’s letters. Yet the content of this book is highly treasured and a bedrock for our understanding of our Savior. While the world around us descends into relativism, new age philosophies and a liberal “everything goes” mindset, the book of Colossians is like a light in the dark. In it we see the most powerful and beautifully worded Christology in the New Testament. The might, power, supremacy, and sufficiency of Christ the Creator and Sustainer are detailed in vivid fashion. New believers can study Colossians to better understand just who Christ is and long-time believers can keep coming back to this book to get back to the roots of our faith in Christ, who is our head. While the theme is cosmic and grand in its scheme it still relates to each of us just as it related to this small out-of-the-way church.

The Church: We never read in Acts that Paul visited this church. Even in Colossians (1:4, 9, 2:1) we see only that Paul heard of them. Yet the church was still there as a result of Paul’s ministry. In Acts 19 we see that Paul ministered in Ephesus. It was during this period of two years that we learn every person in all of Asia heard the gospel (20:31). Paul’s ministry was effective because it reached beyond himself to areas he had never personally been. This should in fact be the goal of every Christian worker. The church in Colossae shows us the principle of reproduction in action. It is this type of multiplication which we should hope to emulate in the ministry which God has called us to.

It appears that Epaphras (1:7, 4:12) was likely trained by Paul and sent to Colossae to plant the church there. Primarily the church was made up of Gentiles and there are few of the normal teachings about Jewish legalism and the like which often fill up epistles to churches where Jews formed a majority. When Paul wrote them, false teaching seems to have creeped in, which Paul sought to extinguish.

1. Paul is the author – Paul once again identifies himself as an apostle of Jesus Christ. This is what gives him the authority to teach, lead, and command the Colossian church. Paul did not take this authority for himself. Rather it was given to him by Christ. At the same time Paul mentions Timothy. Timothy had ministered with Paul in Ephesus and was likely known to some of the Colossians.

2. The book of Colossians was written to believers – Some New Testament epistles are written to people in general or perhaps Jews. This was written to the saints and therefore addresses many issues which believers who have already placed their faith in Christ will face. 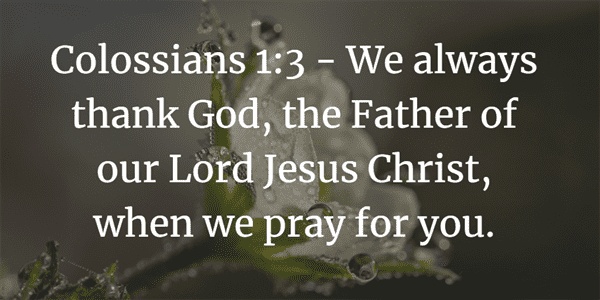 The Colossian church was evidence that God was at work far beyond what they could see. As far as we know, Paul himself or his close companions never went to Colossae. And yet, a faithful church had been planted there. How? Why? We don’t know all the details. But it was God’s work. Examples like this can encourage and remind us that even when we cannot see it God is at work in the world around us. We don’t know the effects of preaching, teaching, training, or discipling others, but fruit may still pop up at the most unexpected time and in the most unexpected places.

Application: In this passage we see one clear application. Paul said that he was “praying always for you.” We too should soak the ministry which we do for the Lord in prayer. At the beginning, we may be praying for unnamed people or places, for fruit to spring up somewhere, but we don’t know where. Later when God does His work, we can give a name and a face to those prayers.

2. Since we heard of your faith – Here is more evidence that Paul had not directly visited this church. He had only “heard” of their faith and not “seen” it. But this verse shows us that Paul cared deeply for believers from all over the globe. It didn’t matter that he didn’t know most of them personally. It didn’t matter that he had never ministered there. They were saved by the same Christ, chosen by the same God, baptized by the same Spirit. Paul was not short-sighted when it came to ministry. He didn’t focus on what he could see right in front of him to the exclusion of everything else. Paul’s vision extended beyond himself to everywhere Christ had never been named. And as he was able to, he devoted his time and resources toward encouraging and teaching these believers.

Application: How would you have reacted to this news if you were Paul? Are you willing to think about, pray about, and show care about people beyond your own circles of influence? Do you pray for countries and mission work across the globe? 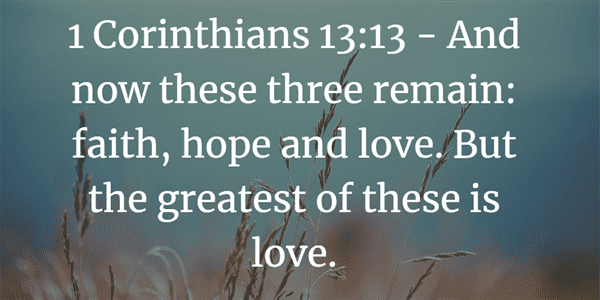 The Colossians demonstrated the three cornerstones of the Christian faith: faith, hope, and love.

Application: If someone were to write about you, would they write that you have these three qualities? Which of these three areas do you need to grow in? What is one specific way you can show love to someone this week?

4. In all the world constantly bearing fruit and increasing – This is what the gospel is supposed to be. It is not supposed to be stagnant. A real believer will not just raise his hand in a church service and then be unchanged. When someone truly believes in Christ, the Spirit lives in his heart and begins the process of sanctification. While there will be times when a believer will fall into sin and perhaps regress in his relationship to the Lord, the over-arching trend should be one of growth, not stagnation or backsliding. A believer who is not growing is abnormal, atypical. Lack of growth is a sign that there is a serious problem below the surface. Perhaps it could even be a sign that the person is not a real believer at all.

The fact that the word of truth will keep bearing fruit and growing demonstrates the power of God. 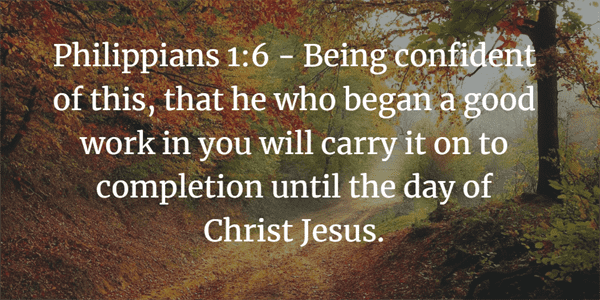 If a person is a real believer, God will continue to work in their lives bringing about growth.

Application: How about you? Are you constantly bearing fruit or just every now and then? Is the word of truth increasing in you? How would you even tell if you are growing? We need to set goals for ourselves. We need to also conduct periodic evaluation on ourselves. Do not become complacent or satisfied with your current spiritual level. Forward and upward by the grace of God!

5. Epaphras – It seems that Epaphras may have been trained by Paul during his ministry to Ephesus or at his two year training school. Then Epaphras took the gospel back to Colossae. Paul clearly thought highly of him and called him a “beloved fellow bond-servant.” This is in fact what we all should be. We should treat each other as beloved and we should be faithful bond-servants of the Lord. It was from Epaphras that Paul learned about the Colossians, their faith, and the struggles they faced.