2 Corinthians 4:4-6 – The god of this age has blinded the minds of unbelievers, so that they cannot see the light of the gospel that displays the glory of Christ, who is the image of God. 5 For what we preach is not ourselves, but Jesus Christ as Lord, and ourselves as your servants for Jesus’ sake. 6 For God, who said, “Let light shine out of darkness,” made his light shine in our hearts to give us the light of the knowledge of God’s glory displayed in the face of Christ.

The god of this world has blinded their minds

Satan is actively working to blind people. When you look at the world today it is shocking what many people believe. One example from early 2021, Nancy Pelosi (Speaker of the US House of Representatives) proposed a rule that would ban House members from using many traditional words including: father, mother, aunt, uncle, brother, sister, daughter, son, and many others. She said that these words are offensive to many people who do not identify with these antiquated ways of describing people’s gender and relationships.

These ideas are the height of folly. To believers, such things appear insane. How could a rational and thoughtful person ever think that the word “mother” should be banned or that it is reasonable to get offended if someone calls herself a “mother?”

This text has the simple answer. Satan has blinded the minds of unbelievers. He is actively working to keep them from seeing or accepting the light from Jesus. And at the same time he is pushing his distorted and twisted version of reality and getting many people to buy in to it. It is a spiritual struggle. Demonic influences are real.
One way they use to keep people from accepting Jesus is to radicalize them so that any mention of the traditional God-given values in the Bible is so offensive to them that they are unwilling to consider any God who espouses such ideas.

Jesus shared the parable of the sower and four different soils. One soil was the roadway. He described how the birds come and quickly eat the seeds that fall there before they can take root. The harder the path is the less likely it is that the seed could find any place to take root. So Satan keeps working to harden people’s hearts in every area.

It is a sinister plot hatched by the father of all lies to keep people out of God’s kingdom.

Reflect: If we know the spiritual struggle behind souls, how will that change our approach to sharing the gospel? Since people are blind to the truth, what recourse do we have? How can help the light pierce into the depth of their souls?

The natural man cannot understand the things of God

1 Corinthians 2:14 – The person without the Spirit does not accept the things that come from the Spirit of God but considers them foolishness, and cannot understand them because they are discerned only through the Spirit.

Without the illumination of the Holy Spirit, people cannot discern the truth. The truth of God is not only rejected, but it is considered as “foolishness.”

When the ancient Romans heard that the Son of God died, they thought it was foolishness. How could God die?

When the ancient Jews saw that Jesus suffered they thought it was foolishness. How could the Messiah suffer and die?

When the ancient Greeks saw that you had to humble confess one’s sin and throw yourself in faith upon God’s mercy, they thought it was foolishness. Is not man’s own wisdom the key to enlightenment?

When modern man hears that God is the Creator and Jesus is the way of salvation they think it is foolishness. Isn’t any supernatural explanation for the universe impossible?

Only Jesus can shine the light into people’s hearts

Verses 5-6 – For what we preach is not ourselves, but Jesus Christ as Lord, and ourselves as your servants for Jesus’ sake. 6 For God, who said, “Let light shine out of darkness,” made his light shine in our hearts to give us the light of the knowledge of God’s glory displayed in the face of Christ.

How can the light pierce those souls?

The answer is not you. It is not in you. If Satan is the one blinding their minds then it needs a power stronger than Satan to “unblind” them. We are not. So we cannot depend on ourselves.

Paul says, “we proclaim…not ourselves by Jesus Christ as Lord.” We are not getting followers for ourselves. We are encouraging people to follow Jesus. Only He has the power the open their eyes. One touch from Jesus and the blinding lies and deception of Satan will be removed, replaced by wonderful sight.

So when you share the gospel and people don’t listen, the answer is not more of you, it is more of Jesus. Resistance should drive us to our knees and drive us to call out to God to remove those forces of darkness which cloud people’s minds, to drive away the mist and shine bright as day.

When we share the gospel we should be humble, realizing that we do not have the power to change people’s lives. You cannot argue someone into heaven. You could answer every question or challenge they throw you way with ease and conviction, but without the light of Christ opening their eyes it won’t change them.

Many years ago I met with a lawyer for several weeks and shared the gospel. Each week he threw every argument he could think of at me against the existence of God, the truth of the Bible, you name it. I felt that I did a splendid job answering these and won the debate. But he didn’t believe (at least that I know of). Instead he walked away.

From that encounter I learned that I can’t debate someone into heaven. More prayer. More dependence on Christ. More humility. More reflecting the love of Christ. These are what is needed.

Application: Do you ever share the gospel without prayer? Who do you know who has been blinded by the god of this world? Spend some time in prayer for them right now. Ask God to open their eyes to the truth. Resolve to regularly pray for this person.

Get a Free Hebrews Bible Study

Sign up for our newsletter to receive your free 23 lesson Bible study E-book of Hebrews. 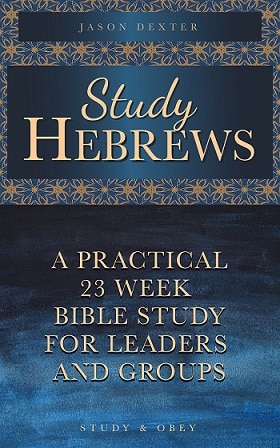 Get a Free Ebook Bible StudyUse Your Time At Home During Covid-19 to Study the Word!

Sign up for our newsletter to receive your free Bible study E-book of Hebrews. Over 50,000 words of in depth discovery questions, teaching points, and applications cover each chapter in 23 lessons. You will receive our practical and in-depth Bible study of Hebrews in .epub and .pdf versions delivered to your inbox.