Join us as we study through Hosea verse by verse. Our discussion questions, verse by verse commentary, and applications can help you or your small group get the most out of this book as you grow in understanding and obedience.

I. The spiritual corruption of Israel (1-4)

Proverbs 11:28 – Whoever trusts in his riches will fall, but the righteous will flourish like a green leaf.

Mark 10:25 – It is easier for a camel to go through the eye of a needle than for a rich person to enter the kingdom of God.

Psalm 62:10 – Put no trust in extortion; set no vain hopes on robbery; if riches increase, set not your heart on them.

Deuteronomy 8:18 – You shall remember the Lord your God, for it is he who gives you power to get wealth, that he may confirm his covenant that he swore to your fathers, as it is this day.

Proverbs 30:7-9 – Two things I ask of you; deny them not to me before I die: Remove far from me falsehood and lying; give me neither poverty nor riches; feed me with the food that is needful for me, lest I be full and deny you and say, “Who is the Lord?” or lest I be poor and steal and profane the name of my God.

1. The more prosperous Israel was, the more spiritual bankrupt they became – Israel started off small and insignificant. Before God established Israel as a nation they were a family of nomadic travelers. After that, they were slaves in Egypt. But God brought them to the Promised Land and established them as a great nation.

Israel gained strength and prominence. It had a large army. The people had vineyards and farms, inheriting their own land and passing it to their children. But notice what happened as they prospered. “The more his fruit increased, the more altars he built; as his country improved, he improved his pillars.”

The richer the nation became, the more the people turned away from God and to idols. This was pride. They forgot the God who gave them all of this. Abandoning His laws, they established their own and built idols, idols who would never rebuke or discipline them.

The same process is often seen in both nations and individuals. Many nations that become prosperous become lazy. At the same time, they often turn away from God who blessed them and become prideful. Such nations inevitably fall.

It happens with people to. God continuously warns us about the dangers of riches in the Bible. Here are some temptations that rich people may face more than the average person:

Application: How can you guard against the pride, worry, and ambition that often accompany worldly wealth?

2. The Lord will break down their pillars (2) – The things that they put their trust in would be destroyed by God. It would be a tangible reminder of their utter futility.

Placing your faith in anything or anyone besides God is a recipe for disappointment. People fail us. Human institutions fail us. Politicians fail us. Even our friends fail us. We too fail others and ourselves. You can learn this hard way (by trusting in these things and then being disappointed) or the easy way by learning from others, such as the Israelites in this chapter.

3. The uselessness of Israel’s kings (3-4) – In verse 3 we see that the Israelites have reversed course 180 degrees from the time of Samuel. In 1 Samuel 8 the nation asks Samuel to anoint a king. He disagrees with this desire and God says they are rejecting Him as their King. Samuel then warns them in depth about the troubles having a king will bring them.

1 Samuel 8:6-7, 10-18 – But when they said, “Give us a king to lead us,” this displeased Samuel; so he prayed to the Lord.  And the Lord told him: “Listen to all that the people are saying to you; it is not you they have rejected, but they have rejected me as their king. Samuel told all the words of the Lord to the people who were asking him for a king. He said, “This is what the king who will reign over you will claim as his rights: He will take your sons and make them serve with his chariots and horses, and they will run in front of his chariots. Some he will assign to be commanders of thousands and commanders of fifties, and others to plow his ground and reap his harvest, and still others to make weapons of war and equipment for his chariots. He will take your daughters to be perfumers and cooks and bakers. He will take the best of your fields and vineyards and olive groves and give them to his attendants. He will take a tenth of your grain and of your vintage and give it to his officials and attendants. Your male and female servants and the best of your cattle and donkeys he will take for his own use. He will take a tenth of your flocks, and you yourselves will become his slaves. When that day comes, you will cry out for relief from the king you have chosen, but the Lord will not answer you in that day.”

But because they insisted, God gave them a king. Now they finally get fed up with their kings and say, “we have no king.” All the Israelite kings of the Northern Kingdom were evil. Not one of them served God. And the last five were especially evil, having taken the throne through treachery. Assassinations and coups were the norm. The kings cared only for themselves and not for the people.

But their reversal does not mean that they finally came to respect God as the ultimate authority. Neither does it show they repented of their stubbornness in demanding a king. Verse 3 says, “for we do not fear the Lord.”

What you see is that they didn’t respect any authority. The kings did nothing for them. Their words and laws were empty. But even this did not drive them to the Lord.

Lesson: God is always proved right in the end. Samuel’s words came true. You don’t always need to “see to believe.” A wise person takes God at His word and accepts His warnings without having to experience them himself.

II. Israel would be judged along with its idols (5-10)

1 Kings 12:26-30 – And Jeroboam said in his heart, “Now the kingdom will turn back to the house of David. If this people go up to offer sacrifices in the temple of the Lord at Jerusalem, then the heart of this people will turn again to their lord, to Rehoboam king of Judah, and they will kill me and return to Rehoboam king of Judah.” So the king took counsel and made two calves of gold. And he said to the people, “You have gone up to Jerusalem long enough. Behold your gods, O Israel, who brought you up out of the land of Egypt.” And he set one in Bethel, and the other he put in Dan. Then this thing became a sin, for the people went as far as Dan to be before one.

Colossians 3:5 – Put to death therefore what is earthly in you: sexual immorality, impurity, passion, evil desire, and covetousness, which is idolatry.

Jonah 2:8 – Those who pay regard to vain idols forsake their hope of steadfast love.

Isaiah 45:20 – Assemble yourselves and come; draw near together, you survivors of the nations! They have no knowledge who carry about their wooden idols, and keep on praying to a god that cannot save.

2. The inhabitants mourn for their calf – The idol was going to be judged. Hosea prophesies that it would be carried off as tribute to the King of Assyria (6).

What emotions should this invoke?

But the act of judgement did not have this effect. Instead the people are mourning at the loss of their dearly beloved abomination.

In these verses we see the depth of people’s depravity, when good is viewed as evil and evil good. Their hearts are fully attached to wickedness.

Application: What causes you to mourn? God calls us to mourn over sin. But many people are deadened to it or even celebrate it. What is one way you can mourn over sin, either yours or your nations?

3. God’s judgment was at hand – Samaria’s king was going to perish. Their places of worship would be destroyed. Their altars would be abandoned and become overgrown by nature.

4. When I please, I will discipline them – Here we see that God does everything in His own timing, even discipline. At times God’s people may wonder why God seems so slow to deliver judgment to the sinner. Habakkuk wondered the same thing (Habakkuk 1). The people of Israel were living in rebellion toward God for hundreds of years. In His time, He would discipline them. And that time was approaching rapidly.

Some people have attacked God’s character by saying that He allows evil to go unpunished. Interestingly, the people who attack God’s character this way are the ones who certainly wouldn’t want God to actually punish evil. Their logic goes like this:

In this verse, we see the answer to this attack. What is it?

We can actually agree in principle with the first three points. The fourth is where we have a difference.

Proverbs 22:8 – Whoever sows injustice will reap calamity, and the rod of his fury will fail.

Proverbs 11:18 – The wicked earns deceptive wages, but one who sows righteousness gets a sure reward.

1. Ephraim was a trained calf – John MacArthur explains this verse like this: “[Threshing] was far easier work than plowing, since cattle were not bound together under a yoke, but tread on the grain singly and were free to eat some of it.”

Here we see that the times of easy (threshing) were over. Ephraim was going to be put the plow. It is a symbol for hard labor and being forced to go where one does not want to go. Note that Hosea mentions that Judah will have the same fate.

2. You reap what you sow – This principle is evident throughout these closing verses.

Spiritually, this is true as well. If you repent, God will forgive. If you keep sinning, God will punish. If you seek God, He will answer you. If you trust in yourself, then you can only rely on yourself.

The Israelites had been sowing wickedness for hundreds of years. Just like actual crops, sometimes there is a time delay between the sowing and the reaping. Some seeds are very slow to grow.

Bamboo is one example of this. Bamboo seeds can take 4-5 years to sprout. You could plant a bamboo seed and not see any effects whatsoever for years. Then in the fifth year, these shoots sprout. And when they do, they are the fastest growing plants in the world. Some bamboo can grow up to about 90 feet in only 5 weeks (after not even sprouting for 5 years.)

But then those results can come very quickly. As we learned in verse 9, God does these things, when He pleases.

Application: What is one area of your life you want to reap a better crop? What do you need to sow to bring about that result?

Hosea Bible Study Guide E-book – If this study is helpful, you can download the Hosea Bible study e-book or get our paperback Hosea study from Amazon. 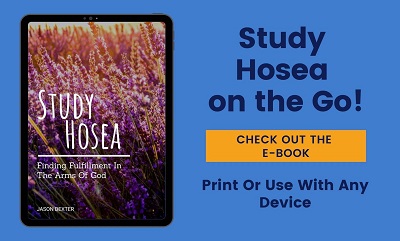