1 Timothy 5:20 – But those elders who are sinning you are to reprove before everyone, so that the others may take warning.

Galatians 6:1 – Brothers and sisters, if someone is caught in a sin, you who live by the Spirit should restore that person gently. But watch yourselves, or you also may be tempted.

James 5:19-20 – My brothers and sisters, if one of you should wander from the truth and someone should bring that person back, remember this: Whoever turns a sinner from the error of their way will save them from death and cover over a multitude of sins.

Matthew 18:15 – If your brother or sister sins, go and point out their fault, just between the two of you. If they listen to you, you have won them over.

Luke 17:3 – If your brother or sister sins against you, rebuke them; and if they repent, forgive them.

1. Peter was influenced by peer pressure – Peter knew the truth. He knew that Gentiles and Jews were both saved by the grace of God. Peter had a vision in which God showed him that “I should not call anyone impure or unclean.” (Acts 10:28) He also said that the vision taught him that God “does not show favoritism.” (Acts 10:34). Finally Peter baptized Gentiles after they too received the Spirit. In addition, Peter was at the Council of Jerusalem when James and he agreed with Paul that the Gentiles need not follow the law in order to be saved. He knew the truth of all of these things.

And yet, for a period of time he was still unwilling to associate with the Gentiles by eating with them. Why?

It’s simple. He was influenced by peer pressure. A group of people had gone to Antioch from Jerusalem. Maybe James had sent them or maybe they were just pretending that James had sent them. But they did not follow the principles that James had agreed to in Acts 15. Instead they adhered to the traditional Jewish belief that Jews should not eat with Gentiles. They pressured Peter. Peter gave in to them. In this case he chose to please people rather than pleasing God. From this we learn several lessons:

Application: Do not to be in a “click” like Peter. Do not just hang out with the same friends every time and ignore others who are not “worthy” to be in your circle or whom you think you have less in common with. Do not just eat with the same set of friends. Yes, you feel comfortable with those people. But look who Jesus ate with! He ate with the sinners, people who you may be very uncomfortable to eat with. Think how you can reach out to others. Take initiative to invite others to your group, to eat with newcomers.

I heard a sad story of a lady who took her daughter with her to church. There were about one hundred people. No one said ‘hello’ to her. She and her daughter were there the first time and they were ignored. Is this right?

Unfortunately in many churches newcomers may be ignored. It is easier for us to hang out with people we know. Jesus took initiative to greet Zaccheus and visit with him. Who will your Zacchaeus be?

Application: Next Sunday at church look around and find someone you have never met before. Walk up to them. Introduce yourself. Ask them some questions. Then repeat this until it becomes a habit every Sunday.

2. Paul confronts Peter – In order for the church to be victorious over false teaching, someone must stand up and confront it, even if it is uncomfortable. Did Paul enjoy confronting Peter? It is unlikely. It was an uncomfortable and unenviable task, but someone had to do it.

The Bible is clear that it is our duty to rebuke those who are publicly sinning. Generally the process is to go this person privately first and then with two or three and finally tell it to the whole church. However, in some cases it appears that it is necessary to skip the first step or two and go directly to the last step. Why would this be?

In the case of Peter, the sin was about a doctrinal issue that influenced the entire church. It influenced not just that church, but the entire worldwide church. The issue was about grace and justification by faith. Paul made a public issue out of it because it affected everyone. But this was a special case and not the norm.

Normally speaking, we should go to the person first and give them a chance to repent before escalating the issue. The problem was that this issue was already escalated because it was being done in front of the whole church. Think carefully about what Jesus said in Matthew 18. He says that the last step is to “tell it to the church.” If the whole church already knows then this sin is already in stage 3 so the first two steps could be skipped.

So what do we learn from this?

God has given us fellowship in the church to protect each one of us. We are sinners and we need all the help we can get to be holy. The brothers and sisters around us are a safety net. We should firstly be willing to listen to them when they confront us about something they see as sin in our lives and secondly we should be willing to point out the sin in their lives. This should be an uncomfortable job. If you enjoy doing that, there is something the matter with you. But even though it is uncomfortable, it is necessary. God designed the church this way.

If the body is not fulfilling its function to point out sin, then the body is broken and it will affect everyone. The church needs people like Paul who will make a stand for right and wrong. It needs people who will speak out and call black, black and white, white. When we do so we must be humble and as gentle as possible. We must also do it in a spirit of love and base our conclusions on the Word. If we fulfill that role, the church will be stronger and purer. One pastor once said that his goal is to let his congregation feel comfortable. To that I say, “NO!” That is not our job. Our job is to make sinners feel uncomfortable.

3. Unchecked sin breeds more sin – When no one stood up to the Jews preaching prejudice, the sin of prejudice spread. First to Peter, then to other Jews, and finally to Barnabas. Paul mentions Barnabas because Barnabas was a champion for the “justification by faith” and “Gentiles are equal” principles. He went with Paul on his first missionary journey. He traveled to places far away from Judea to build up churches among the Gentiles. He was teaching to others the very things we are learning in Galatians. And he too fell. This is the result when no one takes a stand. And this is why we must actively speak out when we see believers in sin around us.

Matthew 5:17-18 – Do not think that I have come to abolish the Law or the Prophets; I have not come to abolish them but to fulfill them. For truly I tell you, until heaven and earth disappear, not the smallest letter, not the least stroke of a pen, will by any means disappear from the Law until everything is accomplished.

Romans 8:3 – For what the law was powerless to do because it was weakened by the flesh, God did by sending his own Son in the likeness of sinful flesh to be a sin offering. And so he condemned sin in the flesh.

Titus 3:7 – So that, having been justified by his grace, we might become heirs having the hope of eternal life.

Romans 3:28 – For we maintain that a person is justified by faith apart from the works of the law.

Romans 5:9 – Since we have now been justified by his blood, how much more shall we be saved from God’s wrath through him!

1. Paul re-emphasizes justification by faith – Here Paul returns to his theme for Galatians, justification by faith. In general Jews were not as sinful as the Galatians were, at least not on the outside. Their culture and traditions seemed better. They had more “good deeds.” But even so Paul states that they knew salvation was by faith, not by works or by the law. This is the doctrine. They agreed on the doctrinal level, but we saw that the application of that doctrine was faulty. To correctly apply that doctrine to their lives demanded that they treat Gentiles the same (since both were lost and both needed grace and neither could save themselves.)

All of us would agree with this doctrine, right? So that brings us to a question: Do you look down on sinners? Are you prejudiced toward certain people? 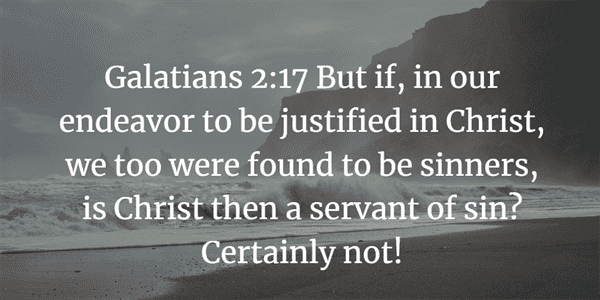 3. If I rebuild what I tore down I am a transgressor – Paul is referencing the traditions of the law including circumcision. The apostles had already agreed that it wasn’t necessary to follow all the rules of the Old Testament law. Those things had been proven to be ineffective for salvation, which is why Christ had to come.

But Peter’s actions were in essence rebuilding/re-establishing those very things which Jesus’ coming had rendered mute. In other words Paul is saying, “Those who refuse to eat with Gentiles and preach the law and circumcision are, in fact, the lawbreakers themselves. The most important “law” is salvation by grace through faith.”

Romans 6:2-6 – By no means! We are those who have died to sin; how can we live in it any longer? Or don’t you know that all of us who were baptized into Christ Jesus were baptized into his death? We were therefore buried with him through baptism into death in order that, just as Christ was raised from the dead through the glory of the Father, we too may live a new life. For if we have been united with him in a death like his, we will certainly also be united with him in a resurrection like his. For we know that our old self was crucified with him so that the body ruled by sin might be done away with, that we should no longer be slaves to sin. 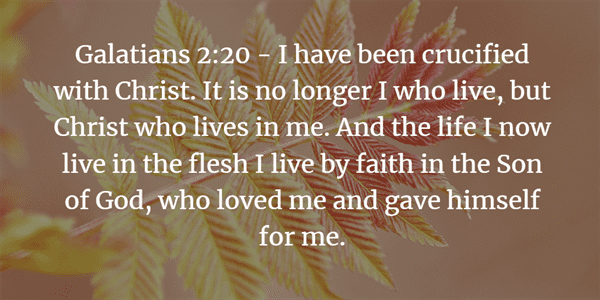 Consider your life for the past week. What is one sin that kept popping its ugly head? Pray and ask for God’s forgiveness. Nail it to the cross again.

Galatians E-Book – If this lesson is helpful for you, you can download our entire Galatians Bible study guide in one convenient E-book.