Proverbs 12:15 – The way of fools seems right to them, but the wise listen to advice.

Proverbs 26:11 – As a dog returns to its vomit, so fools repeat their folly.

Hebrews 7:25 – Therefore he is able to save completely those who come to God through him, because he always lives to intercede for them.

Romans 10:17 – Consequently, faith comes from hearing the message, and the message is heard through the word about Christ.

1. Foolish Galatians – Paul uses very strong language here. It shows the depth of his emotion on this issue. Although it was strong language it was true. Should we speak like this? Generally we should not use such strong language. Gentleness is an important Christian character quality. 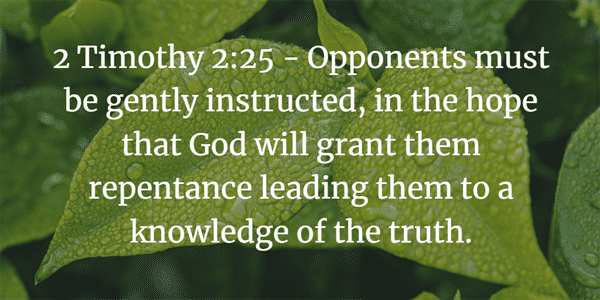 While gentle instruction is the first choice, it might sometimes be necessary to use strong language occasionally to shock people awake from the spiritual lethargy or disobedience. For example, recently I encountered one brother who insists on spreading false teachings in the church. Multiple meetings and letters have not changed his mind. The last letter I sent to him had several strong statements inside. I wouldn’t have used those words or phrases at the beginning, but gentleness didn’t change his mind so I hoped stronger words would.

1 Timothy 5:20 – As for those who persist in sin, rebuke them in the presence of all, so that the rest may stand in fear.

You can see from this verse that rebuking is for those who “persist in sin.” It is not something you should turn to the first time someone sins. But if they keep sinning and don’t listen to gentler advice, then a rebuke is necessary.

It is similar to doctor’s use of defibrillators. They first use them on a low setting. But they slowly raise the electricity level. For a person who is completely unresponsive, they may set it on the highest setting.

Here Paul hits the Galatians with the highest setting! They were beginning to abandon the true gospel of salvation by grace through faith in favor of a works oriented approach.

This was foolish. Their foolishness was not a lack of intelligence or IQ. Rather it was a willful turning away from what they knew to be the truth.

Application: How can you avoid being led astray? The protection against this is to keep our eyes wide open and alert, to know the truth so that we can discern the lie.

3. Before your very eyes Jesus was portrayed as crucified – This doesn’t mean that they literally saw Jesus crucified. Instead Paul and other preachers painted a visible picture for them of Jesus’ crucifixion when they shared the gospel with the Galatians. They did not have the excuse of ignorance since they clearly saw and heard the truth.

4. Are you so foolish? – Paul re-emphasizes his claim that only a foolish person would take the path they were on.

5. After beginning by the Spirit, are you now trying to finish by means of the flesh? – Paul comes back to his main theme in this book again. The Gentiles were saved by the Spirit through faith apart from any works. The gospel message that Paul preached to them was very clear. Believe in the Lord Jesus Christ and you will be saved. Nothing more. Nothing less. The “formula” is not believe in Christ to get saved and then keep doing good works on your own to stay saved. 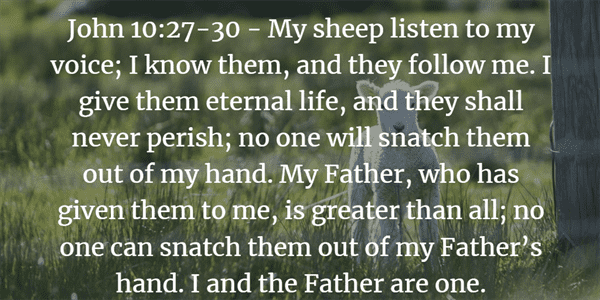 Application: How is this principle helpful for our life today? What application can we make from this? The key lesson is that we have to be humble and continually depend on Christ rather than ourselves.

6. Have you experienced (or suffered) so much in vain? – The Galatians originally believed in the true gospel. They believed that they were saved by grace, that Christ alone is enough. But if they then change their mind and embrace a works oriented approach then their salvation experience would be considered worthless. Everything would have been in vain. All of their spiritual progress would be thrown out the window as they slide back to self-reliance.

7. Verse 5 – Paul re-emphasizes his point. God’s work on our behalf is a gift. It is not something we can earn or deserve. It is based on hearing with faith and not by works.

Knowing this, how should we react? What should we do knowing we cannot earn salvation either before or after believing?

James 2:20-24 – You foolish person, do you want evidence that faith without deeds is useless[a]? Was not our father Abraham considered righteous for what he did when he offered his son Isaac on the altar? You see that his faith and his actions were working together, and his faith was made complete by what he did. And the scripture was fulfilled that says, “Abraham believed God, and it was credited to him as righteousness,” and he was called God’s friend. You see that a person is considered righteous by what they do and not by faith alone.

1. Abraham believed God and it was credited to him as righteousness (Genesis 15:6) –

Paul uses the example of Abraham to prove his point of salvation through faith. Abraham is the patriarch of the Jews. God extended to him the Abrahamic Covenant. Abraham faithfully obeyed God, leaving his home and journeying into the unknown. He faithfully obeyed God by willingly offering up his heir, Isaac, as a sacrifice. And yet it is not these things which made him righteous. It is his faith.

The principle in this verse is extremely important. Paul quotes it also in Romans 4:3 and James quotes it in James 2:23.

From the very beginning God established this “salvation by faith” principle. If their forefather, Abraham, who was far more obedient than they, could be saved only by faith, then how could the Galatians be saved through the works of the law?

2. Those of faith are the sons of Abraham –

Galatians 3:29 – And if you are Christ’s, then you are Abraham’s offspring, heirs according to promise.

Hebrews 11:8 – By faith Abraham obeyed when he was called to go out to a place that he was to receive as an inheritance. And he went out, not knowing where he was going.

Jews took great pride in their ancestry. They believed they were special because they were children of Abraham. And they believed that they deserved God’s favor, blessings, and even salvation because of their lineage.

John the Baptist shot this idea out of the water. 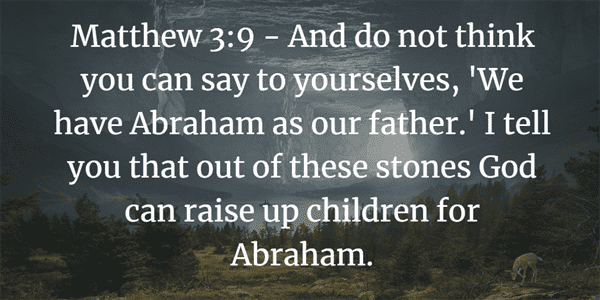 He recognized that just because a person was a Hebrew, it didn’t mean they had a relationship to God. One’s race didn’t guarantee salvation. In recognizing and preaching against this mistake, John went against the grain of the prideful Jews who looked down on all others and considered that they would be saved because of their heritage.

Paul teaches here that the real sons of Abraham are those who have faith like he did. The Galatians were not Jews. But they could be saved and counted as righteous before God the same way Abraham was.

Application – Know that being in a Christian family doesn’t save you. As I have mentioned before, God doesn’t have any grandchildren. We will all be held personally responsible for our own actions and choices in God’s sight. This is especially applicable to all who come from Christian families.

And it also applies to your children. You need to teach them to understand that they have to make a decision for themselves. Train and teach them so they know all they need to know to make the right decision to serve God with their lives.

3. In you shall all the nations be blessed – Paul says that the Scriptures foreknew the Gentiles would be justified by faith. In other words, salvation by faith is not plan B. The law was given as a mirror to show people their sin It showed people that they could not follow God’s standard by relying on themselves.

Salvation has been and will always be by faith alone.

4. Those who have faith are blessed along with Abraham- Basically we have a choice. We can be like Abraham. Or we can be like the Pharisees. Abraham genuinely believed in God. It was that faith that saved him. God imputed His righteousness to Abraham because of his faith.

The Pharisees attempted to earn God’s favor through works, but these works became external rituals devoid of sincerity or love. They tried to please God with their own righteousness, but failed since they weren’t righteous. Because they didn’t humble themselves before the Lord, He didn’t impute His righteousness to them.

Abraham had strong faith. And this faith moved him to action. So Paul is not teaching an empty faith.

Sharing – How has your faith in Christ changed your life? God called Abraham to obey Him by going to a new land. What have you had to give up? Is there something more God is calling you to do to follow Him?

Galatians E-Book – If this lesson is helpful for you, you can download our entire Galatians Bible study guide in one convenient E-book.