Romans 8:17 – And if children, then heirs—heirs of God and fellow heirs with Christ, provided we suffer with him in order that we may also be glorified with him.

1 Peter 1:4 – To an inheritance that is imperishable, undefiled, and unfading, kept in heaven for you.

Titus 3:7 – So that being justified by his grace we might become heirs according to the hope of eternal life.

Galatians 5:1 – For freedom Christ has set us free; stand firm therefore, and do not submit again to a yoke of slavery.

Romans 6:22 – But now that you have been set free from sin and have become slaves of God, the fruit you get leads to sanctification and its end, eternal life.

1. The heir is no different from a slave until he comes of age – In the last passage we learned that every person in Christ is equal, Jew or Gentile. The Jews believed that they were heirs of God by birthright. But Paul made it clear that only those in Christ were legitimate heirs. And every person in Christ, slave or free, Jew or Gentile, is Abraham’s offspring and heirs of the promise.

Here Paul makes it clear that being an heir doesn’t really mean anything until a person “comes of age” by personally trusting in Christ. A child who is an heir of a vast estate is placed under the care of guardians and managers (and also a tutor, Galatians 3:24). These supervisors have complete control over the child. He has to obey them in everything. They tell the child heir when to get up, when to eat, what homework to do, and when to go to bed. He needs to ask permission in order to do anything. For all intents and purposes, he is like a slave!

This subordinate role to the guardians will last until the date set by his father. That is the date of coming of age when the heir receives his title and estate. Only then is he set free from the control of these guardians. Only after the date set by the father will he not function as a slave anymore.

2. In the same way we were enslaved to the elementary principles of this world – Here Paul brings his point home. Believers, like the slave heirs in his example, were slaves until they came of age by receiving Christ.

They are slaves of the elementary principles of the world. And that is man-made religion. In Bible school, I did a brief survey of over fifty religions in the world. Every single one of them (except for the gospel of Jesus) teaches a works based salvation of some kind. Why are they all the same? They are the same because they come from the mind of man.

Wherever you go in the world, people follow the same basic logic. That logic is simple. You have to do something good to compensate for the wrong you have done. Many believe that there is something like a giant scale. Your bad goes on one side and your good on another. If the good outweighs the bad than you can make it heaven, or whatever variation of that your own religion believes.

This is the elementary principle of the world. Jews who tried to attain salvation by following the works of the law followed it. Gentiles, who by their own nature tried to diligently follow their rules based religion, followed it.

Make no mistake. This same deception is still widely believed today. I often ask people a question like this, “If you were to die today and face God and He asked you why He should let you into heaven, what would you say?” A large percentage of Western people would answer in some variation of, “I am a good person.” They believe that their goodness, their religion, their adherence to a set of rules, would save them. It will not. 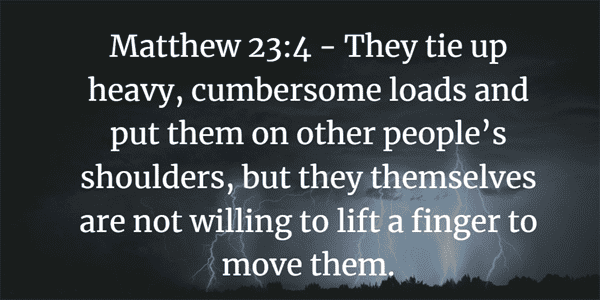 3. When the fullness of time had come – God has his perfect timing. From the very beginning God’s plan of redemption was to send His son into the world to save sinners by dying and rising again from the dead. It wasn’t plan B. But His plan was progressive. Throughout the Old Testament, He was preparing people for Jesus to come.

The Old Testament demonstrates people’s total depravity and complete incapability to reach God’s standards. It reveals that a perfect sacrifice is a necessity if we are to be saved. And in the Old Testament, He prophesies that He will do this so that when it happens we can know it is of Him.

God’s timing is perfect. Often we cannot understand God’s plans. Why does He wait? Why doesn’t He act now?

God always has a reason and His ways are higher than our ways (Isaiah 55:8-9). When the Jews were enslaved in Egypt they prayed to God for help. God answered their prayers and Moses was born. But they had to wait eighty more years for deliverance! In those eighty years the people become a nation.

Application: Are you waiting for God to act or answer a prayer? Write down any reasons you can think of that He might be making you wait. Then, whether or not you could think of any reasons, pray to God and tell Him that you trust in Him and are willing to wait for His timing.

Our relationship with God is sweet and precious. Verse 6 says we can call Him, “Abba, Father.” “Abba” is an Aramaic term of endearment, which means, “Daddy.” I love it when my kids call me “daddy.” It shows the close bond of love which we have. When they call me this, I know that I am more to them than an authority. I am more to them than someone who hands down rules to obey and chores to do. I am their friend and we have a deep love for each other.

We can have this same relationship with the King of Kings. Kings do not allow access to just any person. If you try to force your way in to talk with a monarch you will be arrested. But you know who has access to a king? His children. While the most important nobleman might have to wait outside until he receives a special invitation, children are allowed in. There was once a son who ran up to sit in the king’s lap while he was at counsel. Some nobles stared at him in surprise and he simply answered, “he is my dad.” 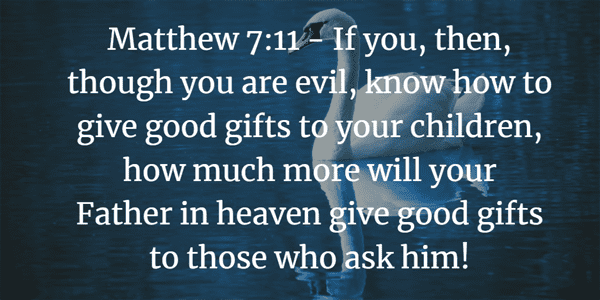 God will stop at nothing to give good gifts to His children.

Application: What an amazing thing that we can be called sons and daughters of God. Spend some time in prayer and thank God for this special relationship you can have with Him.

Romans 1:23 – And exchanged the glory of the immortal God for images made to look like a mortal human being and birds and animals and reptiles.

John 6:44 – No one can come to me unless the Father who sent me draws them, and I will raise them up at the last day.

John 15:16 – You did not choose me, but I chose you and appointed you so that you might go and bear fruit—fruit that will last—and so that whatever you ask in my name the Father will give you.

Nahum 1:7 – The Lord is good, a stronghold in the day of trouble; he knows those who take refuge in him.

So it is with anything apart from God. Whenever a person pursues meaning or happiness apart from God, he will find that he is a slave of the very thing which he is chasing after. In the modern world, many people are slaves of money, slaves of lust, slaves of alcohol, and slaves of every type of addiction. Demonic forces are behind these things just as much as they are behind graven images. Satan promises freedom, right up until the time he snaps on the chains.

2. Now you have come to know God or rather be known by God – Now their life is to be different. They are changed. And note that Paul emphasizes that it is God who takes the initiative to reach out to us (John 6:44, John 16:15). He chooses us. He loves us first. 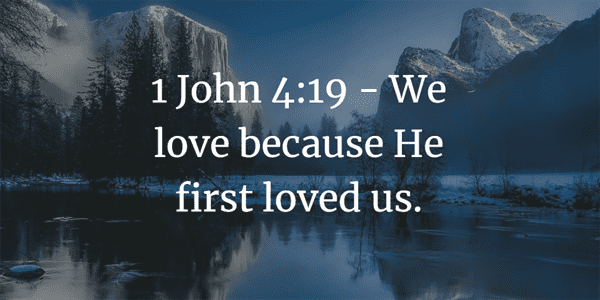 Application: What does this mean for us? Here are a few implications:

Therefore abandoning salvation by faith to pursue circumcision and the law was a return to the weak and elementary principles. It is the principle that people of all cultures across the world have always gravitated to, and that is doing good to compensate for wrong. It doesn’t work. And it never has.

Application: You were not saved by good works. Therefore do not trust in them. And do not become prideful when you do them. Depend every day on Christ alone.

4. You observe days and months and seasons and years – Jews were commanded in the Old Testament to observe a number of different festivals, which were set on specific days of the year. But the church was not commanded to follow them. A person can choose to observe these as a way to remember God. But it is not required. And no one should legalistically observe these as if doing so could in any way merit favor before God.

Many Christians today remember two major festivals, Christmas and Easter. A number of people only attend church on these days. Many think that if they faithfully go to church on these festivals that they are a good Christian. God looks at the heart. And He is looking at you all year round, not just on Sunday and not just on special holidays. God is not like a divine attendance counter who looks down and takes roll call on some special days of the year. God wants your whole devotion all the time (Romans 12:2).

5. I am afraid I have labored over you in vain – Paul invested time and energy into sharing the gospel with the Galatians and helping to form the Galatian church. But if they departed from the gospel in order to follow the Old Testament law, it would have been for nothing. That fear drove Paul to do everything he could to encourage them in the right way.

We can see his love and care for them. He didn’t share the gospel and then leave. He followed up with them to try to help them stay on the path

Application: Do you have this same passion for people? You should share the gospel with others. That is awesome! But how about after they believe? They will encounter obstacles. You should follow up with them. Ask them how their spiritual life is going. Pray for the. Pray with them. Ask them to meet and study God’s Word together. Encourage them when you see them struggling. Think of a person you have reached out to before. What can you do this week to follow up with that person? Is there someone you can ask to meet regularly with to study the Bible?

Galatians E-Book Bible Study – You can access the complete online study of Galatians by downloading our e-book here.

Galatians Paperback Study Guide – You can also order a paperback version of the study from Amazon.