These small group studies of Haggai contain outlines, cross-references, Bible study discussion questions, teaching points, and applications.  Visit our library of inductive Bible studies for more in depth inductive studies on this and other books of the Bible you can use in your small group.

Leviticus 6:27 – Whatever touches any of the flesh will become holy, and if any of the blood is spattered on a garment, you must wash it in the sanctuary area.

Numbers 19:11-13, 22 – Whoever touches a human corpse will be unclean for seven days. They must purify themselves with the water on the third day and on the seventh day; then they will be clean. But if they do not purify themselves on the third and seventh days, they will not be clean. If they fail to purify themselves after touching a human corpse, they defile the Lord’s tabernacle. They must be cut off from Israel. Because the water of cleansing has not been sprinkled on them, they are unclean;their uncleanness remains on them.

Philippians 4:19 – And my God will supply every need of yours according to his riches in glory in Christ Jesus.

Proverbs 16:33 – The lot is cast into the lap, but its every decision is from the Lord.

Matthew 6:26 – Look at the birds of the air: they neither sow nor reap nor gather into barns, and yet your heavenly Father feeds them. Are you not of more value than they?

James 1:17 – Every good gift and every perfect gift is from above, coming down from the Father of lights with whom there is no variation or shadow due to change.

Deuteronomy 28 – In this passage God promises to bless those who obey Him, but also warns that those who rebel against Him will be cursed.

1. This is two months and three days after the last message from Haggai to the people in the first part of this chapter.

2. Uncleanness can transfer through touch, but not holiness – Haggai is teaching the people an object lesson through a question and answer session with the priests. Holy meat cannot consecrate other things it touches. But a person who is unclean does pass it on to the object.

3. So it is with this people and this nation – God seems to be telling the people that they are under a curse because of how they have prioritized their own lives above God. This was clearly demonstrated in chapter one when they were focused on paneling their own luxurious houses rather than building the temple, which lay barren. The curse spread throughout the people, contaminating everything. The “sickness of selfishness” permeated the land. The harder the people worked the more this “curse” spread until everything in the land was unclean and defiled, including their sacrifices. 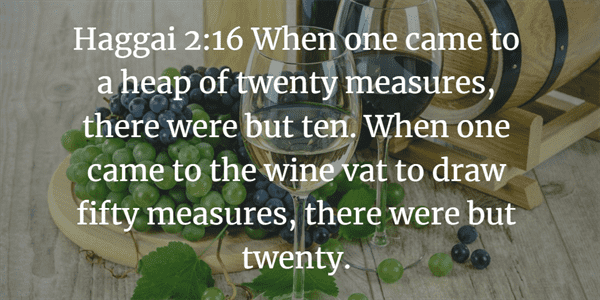 God reminds them how things were before (in chapter one when they were still rebelling against Him.) The people expected a certain amount of return for their labor, but it was always less than expected. Even their store piles or containers had less than what they thought. God was working against them supernaturally. Blight, mildew, and hail were some of the methods he used.

Application: You do want God to be working against you! There is not really anything worse than that. If things seem to be stacked against you, then you should evaluate if there may be a sin in your life that has not been dealt with. Certainly not all trials are a direct result of sin, but some may be. It needs careful prayer and reflection to discern if they are or not.

5. From this day on I will bless you – A great promise! The people had straightened out their priorities and God promised to “shift the wind in their favor” so to speak. He would now work providentially on their behalf rather than against them.

Application: If you obey God, He will bless you. The form that the blessings take could be different now than in the Old Testament. In Old Testament times, God blessed the Israelites materially. Blessings were often physical blessings. These tangibly showed neighboring nations the results when God’s people served Him and attracted them to the Lord. Now we are under the New Covenant. And blessings are generally spiritual. God can and does bless His people financially or healthwise, but this is not promised, and a lack of material blessings is not an indicator of God’s displeasure now like it was in the Old Testament.

Daniel 2:44-45 – In the time of those kings, the God of heaven will set up a kingdom that will never be destroyed, nor will it be left to another people. It will crush all those kingdoms and bring them to an end, but it will itself endure forever. This is the meaning of the vision of the rock cut out of a mountain, but not by human hands—a rock that broke the iron, the bronze, the clay, the silver and the gold to pieces.

Isaiah 11:9 – They will not hurt or destroy in all My holy mountain, For the earth will be full of the knowledge of the LORD As the waters cover the sea.

1 Peter 2:9 – But you are a chosen race, a royal priesthood, a holy nation, a people for his own possession, that you may proclaim the excellencies of him who called you out of darkness into his marvelous light.

Ephesians 1:3-4 – Blessed be the God and Father of our Lord Jesus Christ, who has blessed us in Christ with every spiritual blessing in the heavenly places, even as he chose us in him before the foundation of the world, that we should be holy and blameless before him.

1. The twenty-fourth day of the month was a two message day!

2. God is going to shake up the world order – We have seen this from time to time already. God raises up and throws down the nations. But I believe this is referring to the millennial reign when Christ will defeat the nations of the world who are united against God and set up His thousand year reign. This is also prophesied in Daniel 2:44-45, where Nebuchadnezzar has a vision that a rock not formed by human hands would shatter the kingdoms of the world. Although Jesus reigns spiritually in people’s hearts and through His church, these prophesies indicate a future, physical reign which will be fulfilled literally one day as Jesus reigns from Jerusalem.

Application: Do not put your trust in politics or world governments. Neither should you build your life trusting in these or the stability they seem to offer. Doing so is like building your life upon the sand. Governments and nations can fall in a day with little warning. Even at the best of times, political leaders are often corrupt and cannot hope to solve the problems of the world. Rather than trusting in people or our country, we should trust in the Lord. Building your life on the solid rock of Jesus is the solution so that yo will have something firm to cling to even if the world around collapses.

3. God’s promise to Zerubabbel – This promise is similar to the one God made to David in the Davidic Covenant. At this time the line of the Messiah seems to be in confusion. There is no one on the throne in Israel because there is no throne. Kings have been killed and imprisoned. God’s very promise to Zerubabbel seems to be in danger of being broken. And then God says, “I have chosen you.” God chooses Zerubabbel to carry on this promise to David. The line of the Messiah would pass through him. His descendant would be on the throne once again and fulfill all of the promises which God to David. These are all fulfilled in Jesus, who will reign over Israel forever one day. And Jesus Himself is descended from Zerubabbel (Matthew 1:12-13). 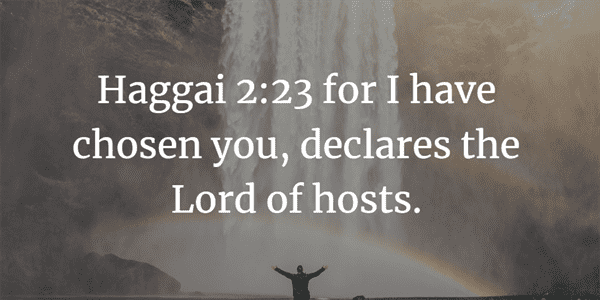 We see with the Jews in the time of Haggai that God is patient and long suffering. For sixteen years they followed their own pursuits, and He still forgave them and accepted them again. In like manner, He will never abandon you. The remnant being allowed to return to Jerusalem after the captivity was a second chance. And when they returned, they went back to pursuing their own things, once again proving faithless. So God gave them another chance. Thank the Lord for His forgiveness and grace. Thank the Lord for His patience with us even when we go off of the path again and again. In the book of Haggai, we are reminded that God is a God of second, and even third, chances.

E-book: If this study is helpful for you, get the complete Haggai study in one convenient e-book.