I. Restore the weak, repent of sin, and pursue sanctification (12-17)
II. Contrast between old and new covenants (18-24)
III. Receive God’s warning and fully participate in His kingdom (25-29)

I. Restore the weak, repent of sin, and pursue sanctification (12-17)

Genesis 25:33 – But Jacob said, “Swear to me first.” So he swore an oath to him, selling his birthright to Jacob.

Genesis 27:41 – Esau held a grudge against Jacob because of the blessing his father had given him. He said to himself, “The days of mourning for my father are near; then I will kill my brother Jacob.”

2 Timothy 2:21 – Those who cleanse themselves from the latter will be instruments for special purposes, made holy, useful to the Master and prepared to do any good work.

1 Thessalonians 5:23 – May God himself, the God of peace, sanctify you through and through. May your whole spirit, soul and body be kept blameless at the coming of our Lord Jesus Christ.

Romans 6:6 – For we know that our old self was crucified with him so that the body ruled by sin might be done away with, that we should no longer be slaves to sin.

1. Knowing that God discipline those who sin should motivate us to action. Discipline is good. It shows us that we are God’s children. It is designed to correct us. But if we don’t sin, then there is no need for correction and no need to experience the sorrow connected with discipline. If we have already sinned it would be better to repent quickly so that we won’t have to remain under God’s hand of discipline long.

2. Verses 12-13 refer to our spiritual lives in figurative language as of our body. Hands, knees, feet, limbs, joints. I believe these refer to any area of our lives that has a problem and needs correcting. See the end of verse 13 which says, “but rather be healed.” The goal of discipline is correction and restoration. We should take the steps necessary to correct our sin and repent so that we will be restored in our relationship with God. This means addressing sin in every aspect of our lives.

3. Verse 14 – Pursue peace and sanctification. This verse shows us a key point of this chapter. We are to take the warnings about discipline to heart. That means the direction of our life has to change. Here it tells us to pursue peace with all men. This doesn’t happen naturally. We have to make an effort and take initiative. How? Perhaps that means calling up an old friend and apologizing for a past mistake. Maybe it means letting go of some resentment and forgiving someone who wronged us. In addition to our relationship with others, the author encourages us to pursue a closer, holier relationship with God by being sanctified. While God is the one who sanctifies us, we are not a third party bystander. Rather we are a participant. It is our responsibility to respond to the conviction and leading of the Spirit by rooting out sin in our hearts. Do not be content with the level you are at now in your walk with God. Always push forward to seek to grow closer and closer to Him and become more and more like Him.

4. God’s grace is completely free. We could never deserve it. He doesn’t look for a worthy recipient since none of us are worthy. That is not what this means. I believe that it means as recipients of God’s grace, we are called to a high standard of living. We are to live our lives worthily of this high calling. Remember Jesus’ parable about the pearls and the swine? Some people treat God’s grace like the pigs treated pearls. They cast it aside without a second thought. They take advantage of it or take it for granted. Doing this is very dangerous. Casting aside the grace of God could allow a seed of bitterness to take hold, which could then grow and spread until it affects many in the church.

Among the Hebrew readers, there were a number who were still on the fence about Christ. They had been taught about Jesus, but they hadn’t yet given their lives to Him. God extended His offer of grace to them, and they needed to earnestly accept it rather than toying with it.

5. The author gives Esau as an example of someone who didn’t appreciate God’s blessings in his life. He spurned his own birthright. He lived for the moment without considering the future. His god was his stomach. His fleshly desires drove him. Later on he regretted this, but it was too late. This verse is a reminder that many may feel regret or sorrow about their past decisions (including decisions about rejecting God), but that normally will not lead to true repentance. Like we learned in Hebrews 6, for those who have been exposed to the grace of God, and shared in the blessings that His people receive, but finally reject God’s offer of grace, it is impossible to renew them again to repentance. Esau seems like he fell into this category. The warning is to not presume upon God’s grace. Do not think you will repent or follow God later, someday in the future. Sin should not be messed around with. Repent of it immediately. Serve God and seek God today, not tomorrow for tomorrow may be too late.

Exodus 19-20 – Here we see the historical account of Israel at Mt. Sinai.

Verses on Jesus our mediator:

1 Timothy 2:5 – For there is one God and one mediator between God and mankind, the man Christ Jesus.

Romans 8:34 – Who then is the one who condemns? No one. Christ Jesus who died—more than that, who was raised to life—is at the right hand of God and is also interceding for us.

1. This section of Scripture contrasts the old and new covenants. Remember that one of the chief themes of the book of Hebrews is the superiority of Jesus. One proof of that is that the covenant which He mediated is better than the old covenant. These verses show some of the ways that the new covenant is superior.

2. Verses 18-21 – See cross-references above. The author is describing a real event when God descended upon Mt. Sinai. The people were not allowed to step foot on the mountain or they would die. God’s presence was clouded by a storm and announced by a trumpet call. It was a terrifying experience. Why? God’s power and holiness were awesome. It was so awesome that the people wanted it to stop. They couldn’t bear it. They later requested that only Moses approach God so that they wouldn’t have to experience this again. This shows the distance of the relationship between man and God at that time. God’s power and holiness were emphasized to remind people of their sin and their desperate inadequacy to solve this problem on their own.

3. Verses 22-24 – This Mt. Zion doesn’t refer to the actual mountain in Israel. Rather it refers more generally to the kingdom of God. Specifically it shows a different way that God deals with believers in NT times (contrasted with the way God dealt with them in OT times as shown when He gave them the law at Mt. Sinai.)

III. Receive God’s warning and fully participate in His kingdom (25-29)

Verses on having the proper fear of God:

1.The warning (verse 25)– Hebrews is full of warnings. This tells us not to reject God. What is the opposite of this? To submit ourselves to Him completely.
The Israelites in the wilderness saw God’s miracles. They experienced them. They were healed by Him, saved by Him, delivered by Him. They were taught by Him. They experienced the blessings of being His people every single day (receiving manna) during their time in the wilderness. Yet they didn’t have true faith. Continually doubting God, they rebelled against Him. God warned them over and over and they heeded Him not. The result was that the entire generation (except Joshua and Caleb) met their early deaths in the wilderness without God.

We have the benefit of even more teaching than they do. We can see God’s plan as it has been revealed throughout history. Now we can look back at Christ’s death and resurrection since the Bible has already been completed. More prophets, teachers, and apostles have come. The lives of faithful saints have been recorded for our benefit. What does all of this mean for us? It means that we are without excuse. If we don’t submit ourselves to God now after all of opportunities He has given us, we will be more culpable than the wilderness Jews.

2. Verses 28-29 – We have so much to be grateful for. All believers are part of an enduring kingdom that will never be shaken or defeated. Earthly kingdoms rise and fall, but the kingdom of God endures forever. Instead of presuming upon God’s grace, His grace should fill our hearts with thankfulness. This thankfulness should be like a well springing up in our hearts all the time. His grace should motivate us to serve Him with all of our hearts. We should not forget what kind of God we serve. He is a big God, awesome in power, holiness, and splendor. Remember from the first part of Hebrews 12 that we are in a race. We must give every last ounce of strength that we have for Him.

We should serve Him with our whole heart, soul, and strength. He deserves it.

Application: What does God want you to apply in the coming week? Be specific! 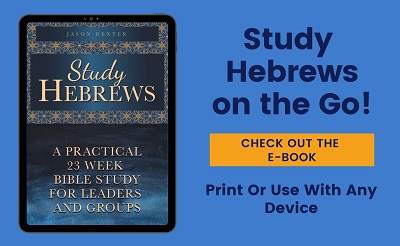