These small group studies of James contain outlines, cross-references, Bible study discussion questions, and applications.  Visit our library of inductive Bible studies for more in depth inductive studies on this and other books of the Bible you can use in your small group.

Psalm 101:5 – Whoever slanders their neighbor in secret, I will put to silence;
whoever has haughty eyes and a proud heart, I will not tolerate.

Proverbs 10:18 – Whoever conceals hatred with lying lips and spreads slander is a fool.

Titus 3:2 – To slander no one, to be peaceable and considerate, and always to be gentle toward everyone.

Matthew 5:11 – Blessed are you when people insult you, persecute you and falsely say all kinds of evil against you because of me.

John 7:24 – Stop judging by mere appearances, but instead judge correctly.

1. Do not slander one another – God wants all believers to speak kind and edifying words about others. 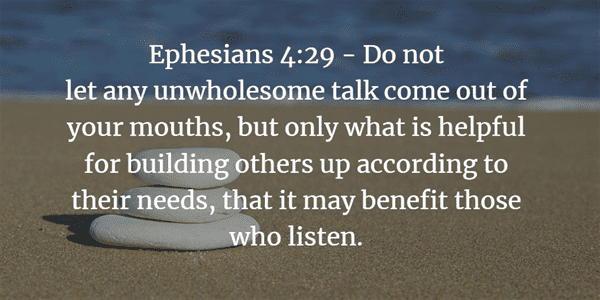 The solution is not only to not bad-mouth other believers. The old saying, “if you don’t have anything nice to say, don’t say anything at all” is partially correct. But silence is not what God envisioned when He created our tongues. The solution is to intentionally think of positive words you can say to others. Words of complaint and frustration flow more naturally than words of appreciation and encouragement.

Application: You can set a goal for yourself to each day or each week say a certain amount of positive things about the people you live with. Then you should intentionally think of these kind things to say and find opportunities to say them. At the beginning you may feel a bit awkward. If you keep doing it, you will find that it will come more and more naturally. And it will begin to heal your broken relationships.

2. When you judge the law you are not keeping it – No one is above the law. We should not pick and choose which Scriptures we will obey. Neither should we find excuses or loopholes. In many modern churches certain teachings which are unpopular in culture today are glossed over, ignored, or outright changed. Sometimes they are deemed “cultural.” Other times, they are interpreted as figurative. For example, the literal six day creation account has been abandoned by many schools, even universities which claim to be Christian and conservative.

The inclination to pick and choose which Scriptures we believe in and follow is not a new one. Thomas Jefferson did the same thing. Jefferson actually cut out sections of the Bible which he did not believe. Predominantly these were miracles. He placed himself as judge over the Bible, picking the parts which he agreed with to believe and rejecting the rest. That is not faith. That is not submission to God’s law.

When a person does this, he sets himself up as the final authority, effectively acting as a law to himself. There is no purpose in even retaining a Bible or claiming to follow it with this attitude.

3. Who are you to judge your neighbor? – Should we judge others? You have probably heard people say something like, “The Bible says do not judge.” But actually the answer is not a simple “no” or “yes.” We should look at these statements in context.

John 7:24 – Stop judging by mere appearances, but instead judge correctly.

In this verse Jesus does not say to never judge others, but says that we are to use righteous judgment.

But Matthew 7:1 says the following: “Do not judge so that you will not be judged. For in the way you judge, you will be judged; and by your standard of measure, it will be measured to you.”

Here Jesus warns that those who judge others will themselves be judged by the same standard and He says, “Do not judge.”

My belief is that we should not use our own opinions or convictions to judge others. For example, if I have decided that my teenage children should not watch an R rated movie because so of the violence inside, that is good and well. But I should not judge and look down on another family who allows them to do so. We should not use our own opinions to judge others in gray areas. If the Bible does not speak to a situation clearly, then we should give others the freedom to make their own choices.

However, I believe that I can and should stand firmly on the truth of God’s Word to warn other believers who are clearly disobeying it.

1 Timothy 5:20 – As for those who persist in sin, rebuke them in the presence of all, so that the rest may stand in fear.

If someone disobeys a clear Biblical command, then we can and should correct them. If you Scripture to confront someone who has sinned then you are not the one doing the judging. God is. God is the ultimate authority and if you simply pass on unaltered His message to others, then you are not judging them.

For example, if you use Romans 3:23 to tell a friend that “all have sinned” then it is God doing the judgment and not you. We should not shy away from the truth of God’s Word. When we use God’s Word to correct people, we in fact are not the judges. He is, since He wrote it.

Application: Do not hold other people to your own extra-biblical standards. But do use God’s Word to challenge and motivate, correct, and rebuke when necessary.

Proverbs 27:1 – Do not boast about tomorrow, for you do not know what a day may bring.

Proverbs 3:5-6 – Trust in the Lord with all your heart and lean not on your own understanding; in all your ways submit to him, and he will make your paths straight.

Romans 1:10 – In my prayers at all times; and I pray that now at last by God’s will the way may be opened for me to come to you.

1. Do not take plans without seeking God’s will (13) – The problem is not making a plan. Many verses in the Bible talk about making plans. 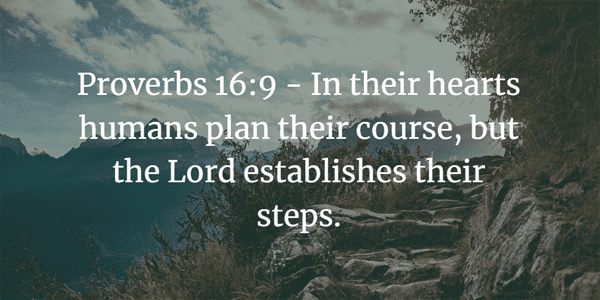 Making plans is a way to be organized. Plans can give us a clear goal to work toward. The problem is making plans for ourselves without stopping to consider if those plans match God’s plans. The person in James 4:13 is not praying and asking God for direction. He is not saying “if it is your will, I will go to start this business.” Instead he simply makes his plan according to his own logic of what he thinks is good for himself. Perhaps this person may later sprinkle his plan with a prayer and ask for God’s blessing.

But make a decision first and then asking God to bless that decision is not the same as sincerely seeking after God’s will.

We should consider the example of Nehemiah. He heard of the situation back in Jerusalem with the unwalled city in ruins (Nehemiah 1). It was a desperate situation. Instead of immediately rushing to the king with a plan, he prayed and fasted. Only after much prayer when the opportunity arose (and after another spontaneous prayer), he finally brought a plan to the king (Nehemiah 2).

2. Do not take the future for granted (14) – In the parable of the rich fool, Jesus describes a self-made successful man. He accumulated lots of stuff. He made lots of money. He built lots of storehouses to hold all of his stuff. He seemed very successful. But he died. And God looked down and said, “fool.” What would he do with all of his stuff? (Luke 12:13-21)

We are not assured another day in this world. We are like a vapor that appears for a moment and then is gone.

Application: Because we are not assured any more time in this world, we should first of all be thankful for the time we do have. Secondly, we should use the time that we have wisely (redeem the time by building things for God which will last). Thirdly, we should pray more and trust in the Lord for our future.

3. If it is the Lord’s will we will live and do this or that (15) – We should live every moment depending on God to sustain us and give us success. Never should we take tomorrow for granted. The saying goes, “do not count your chickens before they hatch.” Making plans without seeking God’s will is like this. James calls it “boasting in arrogant schemes.” If you are mindful that God is sovereign and on His throne it will change how you live, how you face the future, and how you talk.

Instead of pridefully boasting about your plans, you will humbly trust in God and seek Him each step of the way.

This humble attitude should define all that we do. We should not make promises or guarantees easily since we cannot control the future.

But much more than the actual words which could become a saying devoid of meaning, we must pay attention to our heart attitude. We should genuinely have this attitude in all that we do. We should be willing to quickly change our life direction if God so wills.

Point for Discussion: Share about a time when your plans changed. How did you react? What did you learn?

Application: Since time on this earth is short, we should use our time to build God’s kingdom. Prayerfully write out a ministry plan detailing some short and long term goals of how you will use your spiritual gifts for serving God.

James E-book Bible Study Guide – If this study is helpful for you, you can get the whole study in one convenient E-book.