These small group studies of Nehemiah contain outlines, cross-references, Bible study discussion questions, and applications.  Visit our library of inductive Bible studies for more in depth inductive studies on this and other books of the Bible you can use in your small group.

II. The people make an oath to take certain actions in service of God (28-39)

Big Idea: Make a commitment ahead of time to put God first in ALL areas.

Verses 28-29 – In these verses we learn that all the people supported this agreement which their leaders had made. The whole nation was on board from the priests and Levites, to the servants, to the women and children. They had already taken the first step to serve God by separating themselves from ungodly influences. Now they decided together to go above and beyond. We learn several key principles from their agreement.

Verse 30 – They agreed not to intermarry with the people of the land.

In chapter 9 they had already separated themselves from these sinful relationships. But victory yesterday does not guarantee victory tomorrow. Intermarriage was a continual temptation. The Israelites had to guard against falling back into the same sin. Therefore they made a commitment together that they would not support this practice in any way, either themselves or their children. Notice that they don’t give any conditions or any exceptions. Instead they simply agree not to do it.

Application: We too should not tolerate sin. We should be careful not to backslide. It would be wise if we evaluate ourselves so that we can understand our weaknesses. If we are weak in certain areas, we need to take extra measures in those areas to guard against temptation. How can you take steps to ensure that you won’t backslide and fall into the same sins again and again?

Verse 31 – They agreed not to conduct business on the Sabbath.

One of the major problems of the Israelites after the return to Jerusalem was that they pursued their own “kingdoms” instead of God’s. We learn in Haggai that they were making luxurious upgrades to their own houses while the temple was not even built and the city was in ruins. As a culture and as a people they had become very materialistic. One result seems to be that in their efforts to make as much money/profit as possible, they had begun to disregard the rules about the Sabbath. It was no longer a day of rest dedicated to worshiping God. Instead it was just another day for themselves, another day to make money. Or another day to buy and sell in the market. If they were really serious about serving God first in ALL areas, then they would have to make sacrifices. Here is a tangible way to restore God to his place and put Him first again.

Application: Are you building God’s kingdom or are you building your own kingdom? Do you allow your work to keep you from serving God? Do you allow a desire for wealth, materials, or a promotion cause you to become busy pursuing the things of the world? Today is the day to make a commitment to put God first in your work.

Verse 31 – They agreed to renew following the rules of the Sabbath year.

Historically farmers have sometimes allowed fields to go fallow for periods of time. This allows the soil to keep its productivity long term. Each specific kind of crop leeches certain nutrients from the soil. By allowing a field to go fallow, time is given for the nutrients to be restored and for the soil’s natural fertility to be restored. Modern technology often makes heavy use of fertilizer and chemicals which are themselves often unhealthy and can destroy soil’s fertility over a long period of time. It seems God was mandating a practice that allowed the fertile land in Israel to maintain its fertility long term. In addition, God wanted the people to discipline themselves to obey His commands and focus on Him rather than becoming greedy to maximize profits.

Verse 32-33 – They agreed to give to support the work of the priests in the temple.

Here was another area where the people’s greed and materialism was hindering God’s work. How could the Levites and Priests effectively perform the ministry God had given to them if they weren’t supported? The answer is simple: they couldn’t. Lack of support would drive the priests and Levites to quit the ministry (at least temporarily) and go make a living. When they quit the ministry, service for God suffered. The law could not be taught or copied if their was no one to do it. Sacrifices could not be offered if there were no priests.

In the Old Testament and New Testament God’s model for ministry is the same. He wants His people to support His work. It is this financial support that enables Christian workers, missionaries, and pastors to serve God without worrying about where their next meal is coming from.

Application: All of us should actively support those who do God’s work. If you are not currently supporting God’s work, now is a good day to make a commitment to do so. Today we are learning that we should make a commitment to put God first in ALL areas. That includes financial areas. Is God, the God of your finances? Do you use your finances for His glory or for your own ambition?

Verse 36 – They agreed to dedicate their firstborn to God.

We should not only put God first in our career, our finances, and our decisions, but we should also put God first in our families. Consecrating the firstborn was commanded by God to all the Israelites. It was an ever present reminder of what God had done for them in Exodus. God had saved them from death and slavery. He had passed over them in judgment of the Egyptians. Therefore each of them (but specifically the firstborn) belonged to God.

Application: Your family is not your own. Your children is not your own. God has given you family and children for a reason. He wants you to be a good steward. He wants you to raise your children to serve Him. You need to do your part to pray for and train up your children to be disciples of God. For me, the opportunity to make disciples for God is one of the biggest reasons why I wanted to have children. My wife and I often prayed and still pray that God would not give us any children who would not one day trust in Him as their Savior. We don’t have children so that we can be taken care of when we are old. We have children so that we can offer them as a sweet gift to our God. That means we shouldn’t selfishly hold on to them. We shouldn’t discipline them because they hurt our feelings or don’t appreciate us. It is not about us. It’s about God.

Verse 37 – They agreed to tithe of the first they had.

Verse 38-39 – They agreed that the priests would properly handle and use these gifts.

E-book: If this study is helpful for you, get the whole Nehemiah study in one convenient e-book. 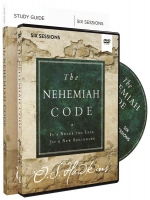