This small group Ezra 5 Bible study contains outlines, cross-references, Bible study discussion questions, verse by verse commentary, and applications.  Visit our library of inductive Bible studies for more in depth inductive studies on this and other books of the Bible you can use in your small group.

I. The people begin rebuilding the temple again (1-5)
II. The local leaders write to Darius (6-17)

I. The people begin rebuilding the temple again (1-5)

Isaiah 41:10 – So do not fear, for I am with you; do not be dismayed, for I am your God. I will strengthen you and help you; I will uphold you with my righteous right hand.

Isaiah 54:17 – No weapon forged against you will prevail, and you will refute every tongue that accuses you. This is the heritage of the servants of the Lord,  and this is their vindication from me,” declares the Lord.

Psalm 71:24 – My tongue will tell of your righteous acts all day long, for those who wanted to harm me have been put to shame and confusion.

1. The people started off their return to the land well. Some of their first actions included rebuilding the offer, re-instituting the sacrifices and celebrating festivals remembering God’s providence, festivals that hadn’t been celebrated in centuries. They were excited and on fire to serve God. Then adversity came. Their enemies rose up to ensnare them and try to slow them down and stop them from rebuilding the temple. They tried every trick in the book from sabotage to intimidation and discouraging them. Unfortunately it worked. The people gave up rebuilding the temple. They allowed God’s enemies to keep them from doing His will. They returned to their homes and started focusing on their own lives, putting themselves ahead of God. This situation went on for 16 years!

2. God used two prophets, Haggai and Zechariah, to rebuke the people for their disobedience and laziness and inspire them to begin rebuilding again. To see some of what was going on in these 16 years we are going to jump over the Haggai and read the book (two chapters). 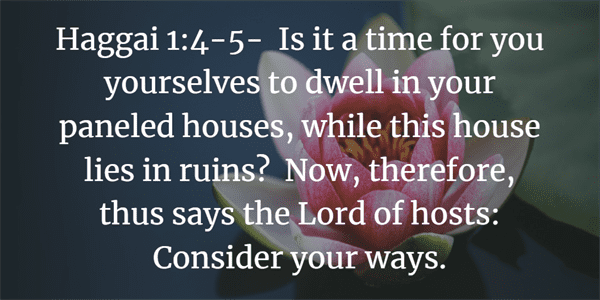 From Haggai we can learn several key points:

a) The people thought they would wait until a later time to finish the temple (putting off what God wants us to do today is one of Satan’s all time classic attacks). (Haggai 1:2)

c) They focused on materials, but because of their sin God was not blessing them. The harder they worked the less they got. They had ignored God’s instructions and it was time to repent (5-11)

f) The new temple was nothing compared to the old one, but God would be with them and didn’t care about the physical appearance of it (3-4)

g) One day God will act in a marvelous way and make Jerusalem the center of the world and people from the four corners of the earth will bring tribute to it.

3. Application: What principles can we get from the book of Haggai? What specific things can you learn from the passage that you need to apply? Discuss together.

4. Leadership is very important. Throughout Israel’s history we see that the people of Israel normally follow their leaders actions, whether good or bad. If the king worships Baal, they worship Baal. If the king follows God, they follow God. Here Zurabbabel and Jeshua made the decision to resume the work. The people followed them. If God has put any of us in a position of authority/leadership, we need to take our responsibility seriously and use the position we have to inspire others to follow God and do what is right.

5. Another group of people came to challenge the temple rebuilding project. They include the locally appointed leaders over that region of the Persian Empire and do not appear to hate the Jews or have the same motivations to stop the work as those in chapter 4 did. They seem to be doing their job to figure out what is going on and make sure that no law is being broken. Likely their motivation is to protect their own skin. They don’t want to be negligent and have word get back to the King that those under them are engaging in any type of subservient behavior.

6. The Jews gave them the names of the key builders (the equivalent of in China giving your ID card number to the police). The fact that the leaders continued on in the work even though it was their own necks on the line if the king decided against them was proof that they had really repented and truly desired to serve God this time around. 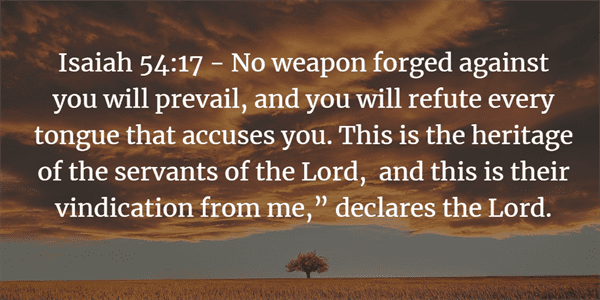 7. God was with them. The political leaders (Tattenai etc.) could have asked them to stop until they had a decision from the top. But they didn’t. They allowed them to keep working. This is surprising because it was a little risky to allow them to keep doing it. If the king ruled that they were breaking the law to rebuild the temple then he may have blamed them for allowing the work to continue for a while.

a) Application: The people truly repented and God blessed them. This is very different than what we see in Haggai. While they were sinning, everything seemed to be going against them. Now that they were serving God He was blessing them and giving them favor. Is there anything we can learn from this to apply to our own lives today?

1. The tone of this letter is quite different than the letter in chapter 4. In chapter 4 they flattered, lied, accused, attacked, and deceived. This letter seems to be pretty neutral. They are not misrepresenting the facts. They lay out the facts one by one and even quote the Jews so that the king can hear their point of view. This is admirable.

2. Verses 11-16 record the Jews statement with their reasons for rebuilding the temple .We can see that they also lay out the facts that we have read in Ezra 1 as well as the history about Nebuchadnezzar’s destruction of Jerusalem. In verse 11 they identify themselves as servants of God. In verse 12 they ascribe the reason for their demise to the nation’s horrendous sin before God. This also shows a repentant heart they were willing to take responsibility for their nations’ sins and recognize the past mistakes that they had made. This is another sign that they were truly repentant. Any person who makes up his mind to serve God will face adversity. And we will also fall. We will have spiritual highs. And we will fail sometimes too and sin against God. Knowing this, I just want to leave you with this verse. 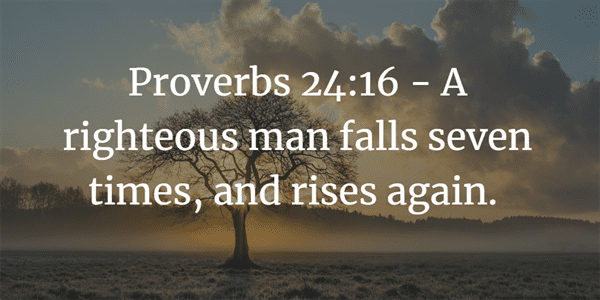